skip to main | skip to sidebar

"The facts were these": the empowerment of women (and men) in Pushing Daisies 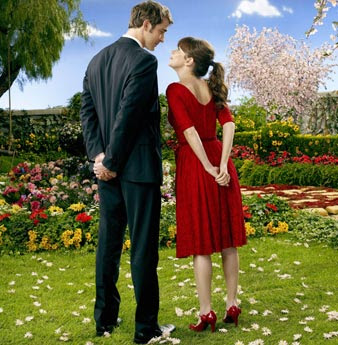 When you think of portrayals of women on television, what comes to mind? I'd bet you picture scantily-clad, shockingly promiscuous, terribly cast vixens. Sex sells, and nobody knows this better than film and TV industry fat cats. Put a piece of flesh in front of America, and you'll have 'em banging down your door.
But there's at least one show that treats women as more than the sum of their parts: Pushing Daisies. The series, created by the visionary Bryan Fuller, is now in its second season. It depicts its female characters as strong, compassionate, independent, and good-natured. And now ABC has decided to cancel it.
For the uninitiated, here's the very least you need to know: In this romantic comedy/fantasy/detective drama, Ned, a shy, kindhearted pie maker (played by the amazingly talented Lee Pace) has a gift. He can bring the dead back to life with a single touch of his hand. But there are two catches. If he touches that formerly deceased person a second time, they will return to their posthumous state forever. If he should leave a person alive for more than a minute, however, someone else will die in their place. Enter private investigator Emerson Cod (played by the very entertaining Chi McBride). He discovers Ned's ability, and employs him to revive murder victims in order to find their killers and collect the reward money. One such victim turns out to be lonely tourist Charlotte "Chuck" Charles (played by the gorgeous, skillful British actress Anna Friel). She was Ned's childhood friend and first kiss, and hasn't seen him since. Upon waking her, Ned realizes that he has feelings for her, and so keeps her alive indefinitely. The two fall in love, becoming the sweetest, most charming fictitious couple to hit the small screen in decades. This turn of events takes place much to the chagrin of Ned's co-worker and secret admirer, Olive Snook (the delightful Kristin Chenoweth of Wicked fame), who is made to believe that Chuck faked her own death. Of course, despite their increasingly intense love for each other, Ned and Chuck can never touch. Every episode follows a different whimsical, often themed, murder mystery case, while simultaneously developing the characters' relationships with each other and expanding on their personal stories. 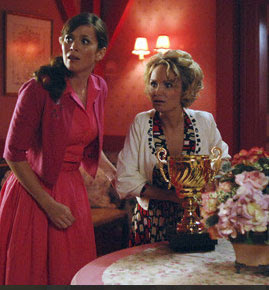 Aside from this show's many other admirable qualities, it is one of the most groundbreaking programs in years, in terms of gender issues. Our heroine, Chuck, is not a desperate housewife, nor a desperate anything for that matter. She is independent, smart, courageous, inquisitive, and vibrant, refreshingly far from the traditional wilting violet of yesteryear, yet maintaining the elegance of the classic ingenue. As evidence of her liberated womanhood, she has absolutely no qualms about bearing a traditionally male nickname. And, yes, she can be all of these things while still maintaining her role as hopeless romantic, and without stooping to promiscuity or indecency. Olive's character also breaks traditional gender stereotypes. She is determined, vivacious, and eager. She was a jockey for several years, entering into a sport generally considered an "old boy's club" and "the sport of kings". And without being even the slightest bit risqué, she is not afraid to assert her sexuality and sensuality. Her love for Ned, one could argue, may possibly be even deeper than Chuck's, and yet, she gracefully steps aside. She can also belt out a song when the mood strikes her, and there's nothing more liberating than that. 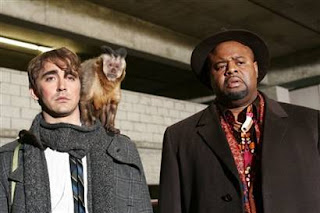 The fellas (such as yours truly) can also look to this show for good examples of authentic masculinity defying antique boundaries. Ned, our protagonist, is sweet, gentle, kind, caring, sensitive, and (dare I say it?) adorable. He's secure enough in his "maleness" to be himself, which includes making pies. Yes, contrary to popular belief, anyone can enjoy the wonders of pie.  None of this impedes his debonair abilities to sweep his lady love off her feet. Equally notable is Emerson Cod's case. He presents himself as a strong, no-nonsense crime-fighter, but privately loves to knit and has unresolved issues with his long-lost daughter. Guys in America need to be reminded that masculinity, just like femininity, is not found in mere conformity to an arbitrary set of social norms. And this show attempts, through the efforts of its amazing creator, to do just that. 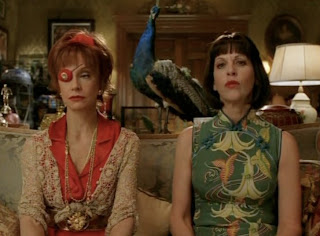 Any discussion of gender roles and Pushing Daisies would be tragically incomplete without at least a brief mention of Chuck's aunts Vivian and Lily (played by those great and venerable stars of stage and screen, Ellen Greene and Swoosie Kurtz, respectively). They are former synchronized swimmers, who once formed a duo known as The Darling Mermaid Darlings. The share a love for fine cheese, and a sadness for their niece's presumed passing. Lily in particular refuses to be bogged down by stereotypes; she tends to enjoy shooting trespassers and other shady characters with her trusty rifle, for example. Both aunts are strong women, though crippled by a social disorder, who accept that they cannot be what society wants them to be, but only who they truly are.
We can all take lessons from this brilliant show. Though our genders are a significant part of who we are, we shouldn't let artificial constructs and stereotypes prevent us from living our lives as we see fit and being the people we truly must be.
With all that in mind, I think ABC's decision is outrageously stupid. And that's all I have to say about that.
Indulge your obsession (or cultivate a new one, so that you too can join in the sadness of PD's cancellation):
Watch episodes for free at ABC.com
Watch the first season on iTunes
Watch the second season on iTunes
Buy the first season DVD from Amazon
Posted by Timothy Dailey-Valdés at 9:57 PM

YESSSS I am so glad you wrote about this. Brian Fuller is amazing. It's worth noting that his other shows, Wonderfalls and Dead Like Me, have strong female protagonists and other characters who break gender stereotypes, such as a lesbian Republican and a tough female cop.

I just want to say that i never watched the show, because i always assumed there would be more time. I love, love, love kristin chenoweth, so i'm incredibly sad that i missed it! and, i just wanted to compliment you, sir, on this excellently written and entertaining essay! :)

SEU Feminist is a student-written, student-created weblog representing the feminist voice of current and graduate students at St. Edward's University in Austin, TX. We're currently looking for contributors, so if you'd like to blog at SEU Feminist, just e-mail Rachel or Emma!